Alive As You Are

by Darker My Love 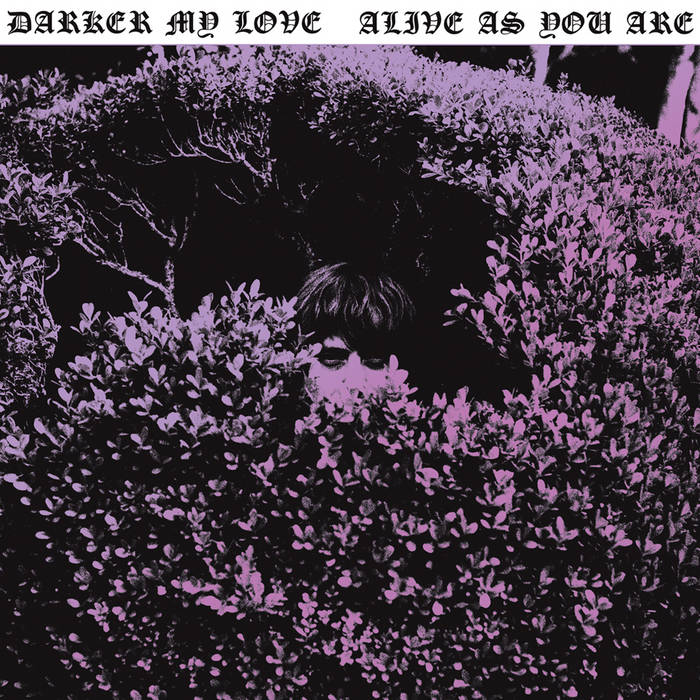 “When you get right down to it,” Darker My Love’s Tim Presley says, “this record is about loss and hard work.”

Informed by profound personal tragedy, Alive As You Are is the Los Angeles-based band’s most musically focused and emotionally direct collection to date. Songs like “June Bloom” and “Dear Author” see DML traveling away from their trademark psychedelic power drones to a more evocative approach reliant on bold, straightforward songcraft and earthy, intricate arrangements. The band’s third Dangerbird Records album, Alive As You Are marks an extraordinary reinvention for Darker My Love – a rambling, powerfully realized work of great nuance and even greater heart.

“I think it was just prime time to try something new,” Presley says. “It just felt right. It wasn’t this pre-conceived thing, like, ‘Okay, we have to be different.’ I think this is secretly the music we always wanted to make. We wanted to make an album that you could listen to and not just rock out to. Something you can throw on on Sunday morning.”

The addition of keyboardist Will Canzoneri on organ and clavinet brought richer textures to 2008’s 2, which received across-the-map critical acclaim for its mind-bending neo-psychedelic grooves and hazily anthemic hooks. “(An) album so deep in aural and emotional layers you don’t quite know what to call it,” enthused the Los Angeles Times, while the Village Voice simply declared 2 “one of the most indelible indie-pop records of ’08.”

Alas, Granelli decided to leave Darker My Love to concentrate on his family in the midst of the long touring cycle that followed 2. The band found themselves in “drummer purgatory,” playing with a number of fill-ins until finally hooking up with The Brian Jonestown Massacre’s Dan Allaire.

“We met through a mutual friend and started jamming,” Presley says. “He just made the songs very special, I think.”

A deeper, more significant transformation came with the August 2008 death of Presley’s father. The experience knocked Presley for a loop, but eventually led him to a complete rethink of how he went about his art.

“It’s pretty crazy,” he says, “it really was life-changing. I know that’s a cliché, but it’s true. It changed everything for me. I realized that if it doesn’t mean anything, then it’s not worth doing. The lyrics have to mean something, they just have to.”

When the time arrived to make a new album, the band considered some name producers, but ultimately opted to work with their friend Nick Huntington, known as co-founder of Attacknine Records and member of duos both electronica (Freescha) and acoustica (The Surf, The Sundried).

“We wanted to try the buddy system,” Presley says. “Instead of having someone you don’t really know tell you about your songs, have a friend there, almost a collaborator of sorts. More like a peer group than a recording team. We’ve known Nick for years, so he fit the bill for that.”

As DML explored new kinds of hooks and melodies and songcraft, it was handy to have an expert on the subject in Huntington, who, in addition to his various glitch/folk/dance projects, has also penned songs for some seriously A List pop stars.

“Nick has a really good folk sense,” Presley says, “but then he writes songs for Britney Spears. But because this record was very much about songwriting, he was a good person to have around.”

In January 2010, DML headed north to record the album at San Francisco’s legendary Hyde Street Studios, located smack in the seedy heart of the Tenderloin.

“We wanted to use a real studio,” Presley says. “but we didn’t want to pay Los Angeles prices. We just couldn’t afford it. But then we had this epiphany moment – ‘Hyde Street would be perfect!’ We really really loved the whole vibe of it. It’s dirty, it’s gross, it’s old. It was just the perfect middle ground between a real studio and home recording.”

It also didn’t hurt that in its original guise as Wally Heider Recording, the studio was the source of some of the greatest records of the 60’s and 70’s, beginning with Jefferson Airplane’s Volunteers and continuing through classics from Crosby, Stills, Nash & Young, Creedence Clearwater Revival, and the Grateful Dead. Not to mention Digital Underground’s “The Humpty Dance.”

“A lot of amazing records have been made there,” Presley agrees. “Whenever you go into a recording studio, you always go, like, ‘Oh wow, this person recorded here!’ I guess you kinda want that to rub off onto your record.”

Indeed, Alive As You Are bears the spirits of its forebears on the album-opening “Backseat” or the chooglin’ “Maple Day.” By stripping away the glorious fuzz and distortion of past DML records in lieu of a crisp, reverb-free production inspired by American Beauty, the album bridges the sonic schism between trippy, hippie SF psych and LA’s edgier Paisley Underground. Presley – raised in San Francisco, longtime resident of Los Angeles – accepts that the archetypal West Coast sound is deeply embedded into his music.

“Even in my punk days, I would still listen to Workingman’s Dead,” Presley says. “It was like a weird guilty pleasure. I used to put Crass records on top of it so no one would know I was listening to it.”

The sessions started out loose, with the band settling into their unrestrained new sound. Fortunately, two years of nearly non-stop touring behind 2 had given the five musicians an almost symbiotic sense of groove and interplay.

“We went on pure feel,” Presley says. “Turned the lights down low and just recorded it. If it slowed down halfway in the song, that was okay because that’s how we were feeling. We just wanted to play music together and record as a team, instead of mapping everything out.”

DML found its creative voice quickly, beginning with “Cry On Me Woman” and the album’s brilliantly baroque centerpiece, “June Bloom.”

“That song set the pace in a lot of ways,” Presley says. “It broke down a wall, like, ‘Yeah, we can do this music too.’ It was very freeing.”

Barbato, who writes or co-writes with Presley, also placed new emphasis on authenticity and connection, resulting in his own impeccably crafted “Dear Author” and “Trail The Line.”

“We both concentrated on actual songwriting instead of jamming,” Presley says. “Everything on this one is for the sake of the songs.”

To further flesh out the arrangements, Darker My Love brought in a few extra hands, including pedal steel guitarist Joe Goldmark – a veteran session player whose credits number Peter Rowan, Buddy Miller, and Brandi Shearer, as well as part ownership of San Francisco’s Amoeba Music – who plays on three songs, including “a bitchin’ fuckin’ solo” on “Maple Day.” For the funereal ”Rain Party,” Presley wanted a female voice to serve as the song’s “life angel.” Having recently made the acquaintance of singer/songwriter Maria Taylor of Azure Ray and Now It’s Overhead, he took a chance and reached out to see if she’d be interested.

“Maria was way into it,” Presley recalls, “but she was in the process of moving to Alabama so first she’s like, ‘Well, maybe I can just do it with ProTools and send it to you” But we were both like, ‘No way, dude! That sucks! That’s like Timbaland/Lady Gaga shit!’ So we flew her up to San Francisco and she came in and just knocked it out.”

After two-and-a-half weeks of sessions, DML left the Tenderloin to mix the album at Prairie Sun Records in Sonoma. While there, they invited Canzoneri’s aunt Moira Little and her friend Leonard Edmondson to add oboe, English horn, and bassoon to the Canzoneri-arranged “June Bloom” and “New America.” That sense of openness – to color, emotion and invention – firmly places Darker My Love and Alive As You Are among the brightest lights in the long, lysergic history of California psychedelic rock. Having put so much of himself into the record, Presley is justifiably pleased with the results, so much so that he has achieved the ultimate state of artistic nirvana.

“It’s weird,” Presley says. “I’m so proud of this record, I almost don’t even care what anyone thinks. I’ve learned that the only thing that matters is that I like it. I can’t humor anybody anymore, I can’t do it. It’s gotta be real. Honesty is king and that’s just the way it is. Life is too short to fuck around with what you do for a living.”