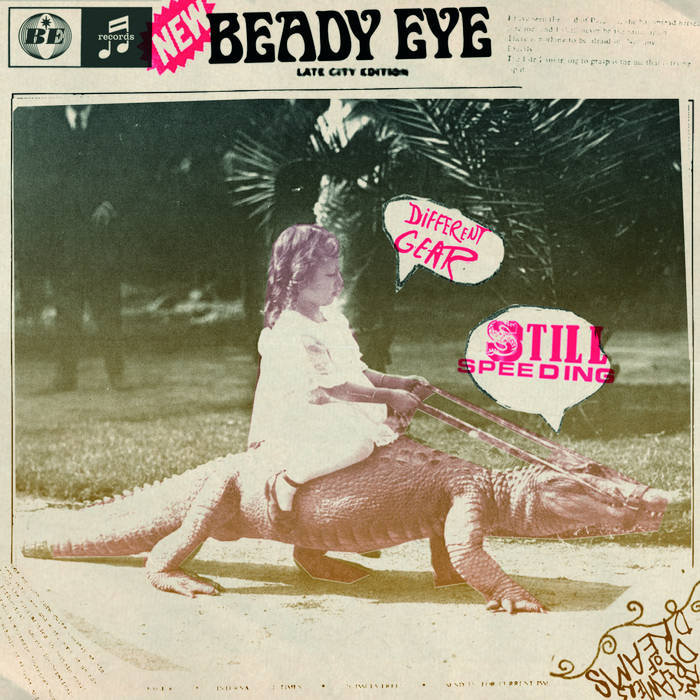 “Music, it’s all about the music, we could all have sat at home after Oasis split but what would have been the point of that. We had a couple of weeks off and then we were back in the studio demo-ing. We’re musicians, it’s what we do, it’s how we define ourselves.”

That’s Andy Bell, one of the two guitarists in Beady Eye, explaining why the band had to happen.

“We love music,” enthuses Liam Gallagher, Beady Eye’s lead singer. “We’ve got these songs, we go in and we do them. We’re fired up, not because we thought we’d show everyone it could happen without you know who [Noel Gallagher], we’re fired up because we’re doing music.”

And with the line-up completed by second guitarist Gem Archer and drummer Chris Sharrock, and with producer Steve Lillywhite [The La’s, Morrissey, U2] also in tow, Beady Eye entered London’s RAK Studios back in June and over 12 weeks put down what Gem calls, “the best thing I’ve ever been involved in.”

“It was important not to sit and dwell on the past,” says Liam. “We’d just come off an Oasis tour and we were on fire, if we’d said, ‘let’s do something in a few months, or next year’, the flame would have burned out or we’d have got the fear.”

And the results are nothing short of astonishing. Thirteen songs that are loud, vibrant, exhilarating. It’s raw rock’n’roll one minute, and classic pop the next from the raucous Jerry Lee Lewis and Stones inspired Bring The Light to the Merseybeat wonder of For Anyone, to the stomping T-Rex glam of The Roller to the pounding Millionaire and Four Letter Word. It sounds like a debut record by a band just starting out with a huge appetite for music, and despite individually all having made records for two decades or more as Chris Sharrock says, “that’s exactly what it is.”

“Some of the songs go back a few years and some are brand new,” explains Andy. “We got in RAK, and it was all exciting and new. We’d never been in there before and recording in Studio 1 was amazing. There are always new things to find out. I’ve never learned so much as I did this time.”

“We had the songs almost in order of how we wanted the album to play out as well,” adds Gem. “It was pretty well prepped. We were that committed.”

“And we were buzzing, confident, we were going in to enjoy it and have fun,” says Liam.

Influences are unsurprisingly worn affectionately on sleeves: there’s even a song called Beatles And Stones.

“Yeah, the Stones were a big one on this record,” says Liam. “We were listening to them a lot. We don’t go off road and say, ‘let’s make a fucking Captain Beefheart record’, this is what we do.”

“The La’s are a big one too,” says Andy, “they are one of the greatest bands, a musical touchstone.”

“And sometimes,” adds Gem, “rather than trying to describe what you want something to sound like, it’s easier to say, you know that line in that record, I want it to sound like that. The Stones’s Child Of The Moon came up once or twice, Little Richard too.”

One song called The Beat Goes On, written by Andy Bell, is redolent of prime Hollies, it’s beautiful, melodic, strong.

“Songs were initially written individually,” says Andy, “but then we all worked on them, added bits here and there. It was Gem who turned this one around.”

“The thing is,” says Gem, “we can say which songs we each wrote but they are actually all of our songs, that’s how we do it, they’re all our tunes.”

Songs were put down live for the most part to capture the moment, the spontaneity, the energy.

“Steve Lillywhite was good at getting us to play live, to get things down in three or four takes,” says Andy.

“We did a lot with live vocals,” says Gem, “which is great when you’re playing, it’s not just dot to dot and filling in the blanks, you’re playing the tune.”

“If you always record in the same way,” continues Liam, “put the drums down, then put the bass down, etc. you always get the same record, it’s always in time and in tune but it’s soulless, everything’s the same, it’s like someone’s walked out the room, it’s autopilot, there is no movement, and you need that to keep on the ball. I’m straight in there now. In Oasis I’d be doing 20 takes, now it’s four takes and you’re there and we’ve got it. But we could have gone with Bob The Builder [as producer], it still would have been right. Because at the end of the day we were on the ball, we knew what we were doing, all the producer had to do was press the buttons we didn’t know how to press.”

With all the band members being guitarists, singers, bassists, producers and drummers, chaos could have ensued, with members competing for dominance but there was never the need for any one person to be the boss.

“The key is just not being afraid to say something when it needs to be said,” says Liam. “Whether it’s about music or anything in life, you say it, you take it on board, you get on with it. There is nothing worse than being in a band when you can’t say anything.”

“The thing is,” adds Andy, “we’ve all got different things we’re good at, but nobody knows everything. Chris was really good at speaking out, he’d be, ‘I’m not feeling this.’ There were a few times when he changed the whole direction, he’d say exactly the right thing at the right time. Like he got the Eddie Cochran beat down on Bring The Light. But Gem is the one with the big picture in the studio, he put the hours in.”

“But it’s about having the ears as well,” says Gem, “we’re just in love with music, even when we finish work on our own music, it’s time to get the tunes on and have a bit of a night, it’s an ever rolling thing.”

“We’ve been lucky,” says Liam. “There’s not one that’s come a cropper, they all instantly sounded great. There was nothing on which we had to roll our sleeves up on. It was, ‘this is fucking great, next one.’”

And their enthusiasm for the new stuff is unquantifiable.

“Hearing the Beady Eye album blasting out of the stereo makes me feel Godlike,” beams Andy. “It makes me want to smash things up.”

“It’s stupid really, but it’s fucking amazing listening to it,” says Gem, “it feels so unbelievably great. It definitely brings the child like qualities out in you. I can’t wait until we bring something else out so we’ve got something new to listen to.”

“I’ve had some of the best nights of my life listening to this record already,” adds Liam. “If we’d have video-ed some nights round people’s houses listening to it, it would be like fucking Quadrophenia.”

Of course people are going to hold up the Beady Eye record against the Oasis canon and compare. For many that pressure would have been too much.

“It wasn’t scary,” says Andy, “because we kept it really close to our chests, no one still knows what’s going on, the maddest thing now is to think that in a month or two it’s going to go out into the world and people’s heads are going to be pickled hearing all these new songs that they’ve not heard before, it will be like, ‘What was that? Help!’ Coming to see us live, they’ll recognise our faces but it will be all new tunes.”

“And that’s the beauty, to have the unknown. It’s a joy,” says Gem.

The plan is simple: make an impact by releasing three singles then the album then go out and play non stop.

The touring band will see the core four joined by Jeff Wootton on bass and Matt Jones on keyboards.

“There was never any fear with Oasis,” says Liam, “You knew people were going to dig it because it was Oasis. But I’ll be honest, when the gigs come round with Beady Eye, we’ll be shitting it, because it’s a new thing. We’ve been rehearsing the live set for the last two weeks though and it’s sounding great. The template for Beady Eye is the same one we had for early Oasis. Put out a lot of great singles not on the album with great B-sides, keep it flowing. What happened with Oasis was you’d end up on an 18 month world tour and you wouldn’t have any time to put new music out. When you get big, it slows you down. When you start out fresh, it’s all about the tunes. And remember, we’re a new band, we’re not going to get above ourselves and start thinking we can play stadiums and arenas, we don’t want to jump the gun, we want to go out and do small gigs, get back into that vibe then do another album, and take it gradually, stay in the moment of being a new band.”

“If Oasis was Muhammad Ali, then Beady Eye are Sugar Ray Leonard,” says Gem. “We just want people to dig us, for Beady Eye to have an energy, to have wind in its sails, to keep on rockin’. It’s not about the big numbers, the months of touring, the size of the crowd. It’s a lot more instant and who knows what’s going to happen.”

“We’re not bothered about chart success, but this deserves to be massive,” says Liam. “And it’s exciting not knowing what’s going to happen, but we know it’s good enough to change people’s lives, we hope it does.”

“The mission never changes,” concludes Gem, “if you’re not feeling it put it down. And that day has never come and I don’t see it coming for a long time.”