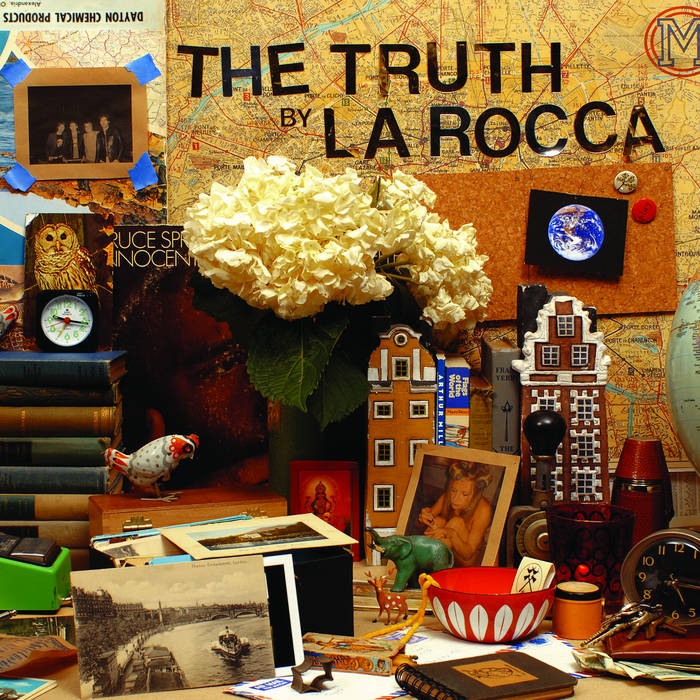 “We’re all Irish piss-takers so we know where the line is with each of us,” says La Rocca singer-guitarist Bjorn Baillie. “And we work very, very hard together. So when we hit the stage, it’s one united wave of attack.”

The lads have lately slayed audiences in their adopted home of Los Angeles, which makes you wonder: How did four blokes from towns with names like Delgany and Rathcoole end up in La La Land? They confess that Angelenos have a hard time understanding them and that they’ve had to Americanize their repertoire of curses. You also have to wonder why they chose to cash in their chips, leave the cozy college town of Cardiff (Wales), where they met, and strike out for terra incognito.

For one thing, they wanted to record with Tony Hoffer (Belle & Sebastian, The Kooks, Beck, Supergrass), who’s based in L.A. But, says Bjorn, “What made us a band straight off was this feeling that we had something to contribute,” something that could not be contained by geographical boundaries, something bound and determined to reach a wider audience. “Maybe it’s one great song in the pantheon of great songs, or maybe it’s a lot more than that; it could be a lot more.” In fact, Bjorn confides, “I want to be the best songwriter of my generation.” Judging by La Rocca’s debut album, The Truth, due August 8, 2006, on Dangerbird Records, he’s off to an excellent start. Further evidence: the EP Sing Song Sung, released Feb. 14 on Dangerbird.

Bjorn, keyboardist/guitarist/singer Nick Haworth – okay, he’s actually English – bassist/singer Simon Baillie and drummer Alan Redmond duly progressed from the stages of Cardiff to Dublin and then to London. Bjorn recalls: “We were driving down to London and playing at these famous clubs. But we had this tatty gear and we’d be wearing God knows what. We’d look at the other bands, who had all these cases and looked incredible, and think, ‘Now THAT is a proper band.”

“We’ve never been part of any scene,” he continues. “We’ve never had a style you can describe with a catch phrase or a clearly defined look, just good songs that we work hard to play well. But there are people who still remember the lyrics to the songs we were playing back in Cardiff.” One of those, “This Life,” made it onto The Truth, and it IS one catchy motherfucker. Daniel Lanois, who shares a music publisher with La Rocca, remarked upon hearing it: “That’s it! That song is a gift. Here’s what’s gonna happen: You’ll release that song and spend three years playing it around the globe. End of story.”

Writing a single perfect pop song is more than most bands achieve in a lifetime. But The Truth is bigger than that, larger-than-life. Note the headlong tumble of “Sketches,” the Supergrass-y gallop of “Sing Song Sung,” the sweeping melodies of “Capitol Pill” and “Goodnight” and “Some You Give Away,” the Exile on Main Street swagger of “The Truth.” The power of these songs is in the writing, in La Rocca’s unerring ability to hit the pleasure center again and again.

It wasn’t always so. Bjorn remembers the band’s inauspicious beginnings: “Nick told me to come by if I had some songs because he had a band. Complete lie! They were just some lads who got drunk and loved a sing-song. No shape or order at all. So one night they played me a couple of songs, and they were fucking dreadful. I’d been writing since I was 15, first on piano and then on guitar, so I played them a couple of mine, and Alan kept saying, ‘Play us another.’ So I played six or seven songs and finally said, ‘Look, if we’re doing this, let’s do it right.’ So my brother Simon moved up from Bristol under very false pretenses to play bass.”

Bjorn has played in bands with Simon since they were teenagers. The two grew up in Delgany, about 20 miles south of Dublin and a stone’s throw from the Irish Sea. “My old man had Cosmo’s Factory [1970], by Credence Clearwater Revival,” Bjorn says of one of their earliest influences. “We’d never heard anything like it. We got all our friends into it. I’m still in awe of that song ‘Long as I Can See the Light.”

Once Simon joined La Rocca – named after “a dank, downstairs bar in Bristol with this massive hole you crawl through to get to the dance floor” – the band began rehearsing regularly. Nick, from the Lancashire town of Burnley, was already an adept pianist. Alan, from Rathcoole, west of Dublin, had been playing drums since he was 15 and had what Bjorn calls “a manager’s head.” “He’s very savvy about what needs to be done,” Bjorn reiterates. “He’s a genius hustler.”

Though Bjorn concedes that La Rocca’s reach occasionally exceeded their grasp – “the songs were sometimes better than we were” – their persistent gigging throughout the U.K. earned them a significant following. In 2003 the Limerick-based label Wet Clay released a four-song EP that garnered glowing reviews and La Rocca their first airplay.

When it was time to record their full-length debut, the band made a list of their dream producers, which included Tony Hoffer. Around this time, La Rocca was flown out to meet with A&R executives in L.A.

“We’d had label interest because of the EP and our success in Australia” [where the song “Sing Song Sung” had landed in heavy rotation], Bjorn relates. “We talked to all these people, including Tony’s manager, who also happens to co-own a label called Dangerbird. Of all the labels, Dangerbird instantly felt right. We’re big on instinct, and they spoke to us in a language we all understood – it was about the music. We decided to sign with them in the end because the label believes in our songwriting and understands our ambition completely. You can’t buy that kind of commitment.”

So La Rocca said a tearful farewell to friends, family and the familiar and headed off for the brave new world of Los Angeles, which, though fraught with peril for these fish out of water, offered some perks. “Dublin’s very real and authentic and gritty, no bullshit about it at all,” says Bjorn. “It’s quite nice to come someplace that’s just a lot of bullshit – I quite like it.”
The Truth was recorded in two months at Hollywood’s Sound Factory. Bjorn says that recording it was truly a defining moment for the band. “You never get a second chance to make a first record, and I think the process of going from there to here has made us feel like a proper band in a way we never had before. This record captures us. In many ways, it’s who we are.”

So that’s why it’s called The Truth, right? Not exactly. The title is more about the song “The Truth” – that would be “truth” with a little “t” – than any grandiose notion of THE TRUTH, either Bjorn’s own or that slippery thing mankind has been wrestling since we crawled out of the primordial soup. “The truth?” he muses. “I dunno what it is.” To be sure, he’s not one to spell out the deeper meanings of La Rocca’s songs, but he does reveal that “The Truth” is about a journalist from a bygone era who “lied through his teeth.” Bjorn was a journalism student at Cardiff University and says he’s long been fascinated by the history of the press, particularly its seamier side.

And though he may be disinclined to discuss the content of the songs, he talks about writing them with great abandon. “Songs can come to me as lighting strikes, but I think you have to be prepared for the lightning to strike, and you have to be dedicated to getting the inspiration onto the page,” he insists. “I’ll be working on a song for hours, trying to find what Nick Cave calls ‘the split second where the right word in the right place can break someone’s heart.’ Sometimes it’s 3:00 in the morning before I finally nail it, and the thrill and relief at having done it and knowing it’s good – there’s no feeling like it.”

Except, perhaps, the feeling of being onstage with his mates, rolling out that united wave of attack. No need for Bjorn to comment further on that; it’s all right there in “Sketches”: ’Course I wanted credit where it’s due/ Feel so very blessed to play with you/ We get over everything it seems/ Wide awake while all around is dream’

please contact distro@awesomemerch.com for help with all physical orders